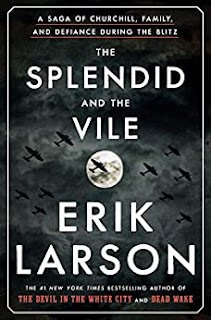 When I first read this we were all living through the COVID-19 isolation/slow reopening and the accompanying shortages, stresses and, in the midst of it all, hopefully discovering new ways to make our lives whole. And now, as I post this review, the world is dealing with the crisis in Ukraine. It couldn’t be a more appropriate time for this book to arrive on your bookshelf.

The Splendid and The Vile is an insightfully detailed and revealing book about the first year of Winston Churchill’s amazing term as Prime Minister (PM) of Great Britain during WWII. If you are tempted to hit the snooze button when you read the word Churchill, please don’t! This is not a snooze book, it’s a riveting retelling of a harrowing year, truly a page turner.

Churchill came into office just as France was falling to the Germans and it became more and more obvious that if England didn’t stop them, all of Europe would be under the control of the Third Reich. But England wasn’t prepared. They were low on everything, including money. They needed help desperately, but in America, President Roosevelt was dealing with isolationists who wanted no part of another World War.

And that’s when Hitler decided to unleash the full force of his air force, the Luftwaffe, trying to beat the English to a pulp, leaving them no option but surrender. No place was safe, not your couch, bed, or even the London underground. Eventually, the bombs set massive stretches of London ablaze and literally decimated port and industrial cities across the nation.

Despite the misgivings of many, including the King, Churchill was the man. His past was complicated, his character unusual, but he was truly THE man to save the nation. His voice lifted up the people and helped bolster their courage. His relentless determination drove the government to perform and produce at heights they never would have reached without him.

Larson has done a fabulous job of taking us into the inner circle, seeing the PM, his family and those around him as human beings. Even in wartime so much of life still goes on. The details are delightful! Turns out the King had the British embassy in Washington DC acquire his favorite toilet paper when there were shortages at home—something we all learned to relate to in recent years!

The PM’s character was unique, and not always popular. He demanded two baths a day–no matter where he was–and dictated constantly, even from bed or the bath, to his loyal secretaries. Evenings were often late and likely to find Churchill, cigar and drink in hand, strutting the premises in his silk dressing gown or on the rooftop of 10 Downing Street, watching Luftwaffe bombs fall while most Londoners took cover.

Along the way we come to know several in his circle quite well: his daughter Mary, young and in search of love and a purpose during the war; his daughter-in-law, Pamela, who fought a losing battle to keep her family together despite her husband’s gambling addiction. But best of all, we meet John Colville, the PM’s personal secretary.  Colville saw it all, both private and public, and wrote about it in his incredible diary, a practice national security would very much have frowned upon at the time, but which paid off nicely for historians.

This is a period I’ve always found fascinating, but even if it’s not your ‘cuppa’  tea, Larson is a writer who knows how to make a reader appreciate the intimate moment, feel the fear and joy, celebrate the wins…and grieve the losses. We owe our inestimable gratitude to the men and women within the pages of this book, who fought against all odds to save their future and ours. This one will stick with you long after you read the last word.

Kelcie Murphy and the Academy for Unbreakable Arts by Erika Lewis

This is a fun adventure as Kelcie discovers she's no ordinary girl, neglected by the human world, but someone with amazing gifts and a special purpose. When she learns about the 'Otherworld' and that she might be able to train as a warrior at it's special academy,...

For The Love of a Good Series: The Charles Lenox Mystery Series by Charles Finch

Here is the first of my new, now-and-then recurring blogs on great book series I have found and loved. Of course, great series are found in all genres, and if you read my blog regularly you know I do read a wide variety of genres. But if I’m reviewing a great series...