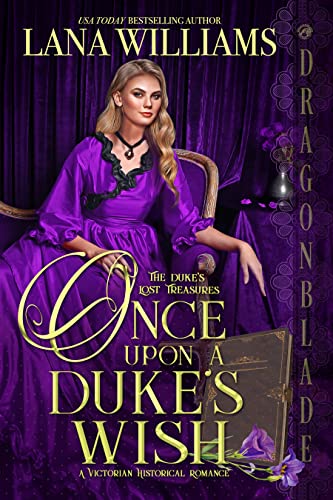 This is the first installment of a new series, The Duke’s Lost Treasures, by Ms. Williams. But it’s far from her first historical romance and it definitely shows in this well written, exciting new tale of the three Wright sisters: Ella, Norah and Lena.

The sisters grew up far from London on Oak Island in Nova Scotia. Their mother died several years past and their father, who spent his life hunting for a legendary lost treasure, lost his life in the process. With no one else to turn to, the sisters go to London to find their grandfather, a Duke, who they’ve never met and who stopped communicating with his daughter, their mother, after she wed without his consent.

They’ve brought along a handful of their father’s treasures, as well as his journal, but upon landing in England the journal is lost. Now, they are at the mercy and hopefully the kindness of their grandfather, who appoints Leo, the Earl of Marbury, to aide them. The only problem is that not only is their grandfather still harboring hurt feelings about their mother, but Leo has some related issues that make him less that happy about the sisters’ arrival—or the need to help in their search for the stolen journal.

Ella, meanwhile, is hoping to crack through the Duke’s hard exterior to find the loving grandfather they hope he will be. She’s also hoping to see her younger sisters settled in happy matches, so the last thing on her mind is falling for the unfriendly Earl. But their search for the stolen journal begins to break down barriers between then, as well as between the sisters and their grandfather.

If you’ve ever seen the series, Curse of Oak Island, on Discovery, you already know something about the legend of the missing treasure and all those who have hunted for it—and continue to, to this day. The author has taken this real-life mystery and wrapped a fictional one around with, tying it all up in a delightfully neat pack with a ribbon of romance. If you’re a fan of historical romance, this is a package you’ll want to unwrap and enjoy reading.

Did you ever have a favorite secondary character in a book and find yourself wishing they had a book of their own? You wanted to know them better, you wanted to see their lives play out and their dreams come true? Well, this is that book for me. A Rogue Meets His...