Short and Sweet Review: On Writing: A Memoir of the Craft by Stephen King 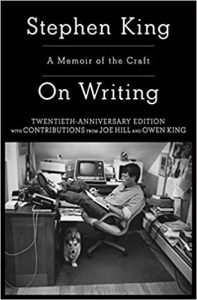 If you spend much time in the writing world it won’t take long before someone recommends you read Stephen King’s book, On Writing: A Memoir of the Craft. It’s happened to me several times. But I confess, I’m not a fan of the horror genre that King writes in so…I was a little squeamish about what this book might hold in store for me. Not anymore!

Let me start by saying that anyone who loves a good Stephen King tale will really enjoy the first third of this book. Indeed, if you are a big fan, it’s worth getting it just for that. King is so much a part of our literary—and movie—history at this point that you’ll no doubt have enough personal knowledge of his work to at least be curious. And really, he does a wonderful job of spinning the tale of the pivotal moments in his early life that fed into his success as a writer.

If you’re hoping to get a glimpse into the story behind the accident that briefly side-lined his career, that comes nearer the end. But even non-writers might find the ‘writer stuff’ interesting because King has a way with words that makes the reading fun, even at the most potentially dull grammatically particular passages.

And about that ‘writer stuff’. It’s pretty interesting too. You’ll learn much about how broadly he reads and how seriously he takes the English language (he was an English teacher once upon a time, after all). King has great respect for Mr. Strunk and Mr. White. If you’re a writer and haven’t dug into The Elements of Style for a while, you’ll get a little refresher course here, and maybe gain a new appreciation of that classic. But you’ll also learn about the rules King still breaks—and why.

For writers, this part of the book is pure gold. Well, really the whole thing is. From start to finish you’ll learn the back story behind so many of the story choices the author made throughout his career. What shaped the character of Carrie? How much of the author is reflected by the character of Paul, the author, in Misery? Frankly, I wish he’d write another book to fill us in on more story creation gems like these.

You’ll also gain some insight into what his career has been like, professionally and personally. His wife, Tabitha, is also a writer, and everything he writes is written with her in mind. She’s his ‘Ideal Reader’, the first to read and critique his work. Her opinion is number one for King.

One of King’s pearls of wisdom is, “If God gives you something you can do, why in God’s name wouldn’t you do it?”  If you’re not already a King fan you might be tempted to pick up another one of his books after you read this one because King does what he can do, and he does it very well.

Did you ever have a favorite secondary character in a book and find yourself wishing they had a book of their own? You wanted to know them better, you wanted to see their lives play out and their dreams come true? Well, this is that book for me. A Rogue Meets His...