Short and Sweet Review: Fifth Avenue, 5 A.M.: Audrey Hepburn, Breakfast at Tiffany’s, and The Dawn of the Modern Woman by Sam Wasson 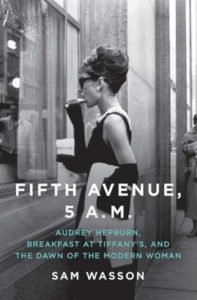 Spoiler Alert: If you haven’t seen the movie Breakfast At Tiffany’s or read the story…tread with caution for spoilers in this book review…

I fell in love with the movie Breakfast At Tiffany’s when I was younger. It seemed so glamourous and nutty and sentimental. When I got older I read Truman Capote’s original short story and realized the story was darker and Holly Golightly, that delightful party girl, was really a uptown version of Julia Robert’s character in Pretty Woman.

So I saw the story differently. It still had glamour and that zany touch, but now there was heartbreak and that sense of two lost souls finding each other to cling to, even if one of them was determined not to. I still tear up every time they find each other…and the cat, in that rainy alley and Henry Mancini’s ‘Moon River’ swells in the background.

Maybe it’s corny and dated…or maybe it’s not. But what it was, at the time, was groundbreaking. The producers were determined to bring it to the screen but they tweaked that story good and Capote pretty much checked out after a while leaving George Axelrod to craft a perfect screenplay, one that kept the essence of the story but beat out just enough of the gritty truth for the Hollywood censors to find acceptable.

In addition to choosing Axelrod as the screenwriter, they made a couple of other genius decisions; they picked Blake Edwards to direct and Audrey Hepburn to star as Holly. Even George Peppard and Patricia Neal seem perfectly cast, though George comes off far less than charming off screen.

I could go on about the perfect casting of the other characters, including Buddy Epsen, who brings a heartrending clarity to the soul of the real Holly. But this book is about the making of the movie and the back story there is fascinating. The efforts that went into getting that perfect opening shot of Holly on Fifth Avenue in front of Tiffany’s gave me a whole new appreciation for the scene as well as the use of New York City almost as a character itself.

It took monumental effort to convince Audrey, with her squeaky clean image, and her controlling husband, Mel Ferrer, to take on what was considered a very risqué part at the time. This movie dealt with the underbelly of all those wacky ‘50’s and ‘60’s movies about sweet girls going to the big city and finding love. It cracked open the shell of fiction and pulled out a little reality, opening the door to more realistic movies in the years to come.  Sex, though unseen, was very obvious. And innocent though she claimed to, Holly still visited Sing Sing prison to deliver the ‘the weather report ‘to Sally Tomato (a great name for a character if ever there was one!). It’s hard to believe that a gal so world weary and wise wouldn’t have a clue what that was all about.

In the story behind the story we find out Audrey longed to return home to her infant son, that George and Patricia went together off screen like oil and vinegar, that the actor that played the aristocratic Jose really was an aristocrat…and so many more delightful behind the scene revelations.

No one was quite sure how the public would take this movie. Would they hate Audrey for taking a part they’d feel was beneath her? Would they find the humor crass? Of course, we know now it was a success, so much so that it got four Oscar nominations, including one for Audrey. But in the end, it was Henry Mancini’s score that took home the only prize.

Of course, we need to address the elephant in the room, the casting of Andy Rooney as Mr. Yunioshi, the wacky Japanese neighbor. Unfortunately they went with Rooney instead of a well-known Asian actor (and they had a great option but passed  up). I don’t even recall if that character was in the book…but either way, in today’s light, it’s a difficult characterization to watch and clearly an unfortunate choice. I think readers will find that part of the story interesting and frustrating. You have to watch a movie not just in the light of the period it was set in but the period it was made in. It’s a reflection of its time and I’d hope a casting mistake like that could never happen today. Don’t hold it against the movie as a whole, which is otherwise a gem.

Clearly, I’m a fan, and if you love the movie too you will love digging into the book for all the details. You’ll see the movie differently, I guarantee it, but you’ll probably enjoy it more.

For The Love of a Good Series: The Joe Picket series by CJ Box

Open Season is the first book in Box's Joe Pickett series. Joe is a Game Warden in Wyoming and he's underpaid, under appreciated, living in a house he doesn't own with his devoted pregnant wife and two little girls. And a dog (who I personally felt needed more...

Kelcie Murphy and the Academy for Unbreakable Arts by Erika Lewis

This is a fun adventure as Kelcie discovers she's no ordinary girl, neglected by the human world, but someone with amazing gifts and a special purpose. When she learns about the 'Otherworld' and that she might be able to train as a warrior at it's special academy,...

For The Love of a Good Series: The Charles Lenox Mystery Series by Charles Finch

Here is the first of my new, now-and-then recurring blogs on great book series I have found and loved. Of course, great series are found in all genres, and if you read my blog regularly you know I do read a wide variety of genres. But if I’m reviewing a great series...